The figure, well above expectations for an expansion of 0.4%, left the year-on-year rate of growth at 3.0%. This too was significantly above forecasts for an increase of 2.5%.

It was the fastest expansion seen since the September quarter of 2012. 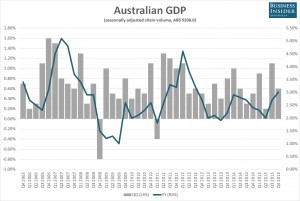 According to the ABS, the robust result was driven by strength in household final consumption expenditure along with public gross fixed capital formation.

Over the quarter household consumption expenditure increased by 0.8%, leaving the annual growth rate at 2.9%. It contributed 0.4 percentage points (ppts) to the quarterly GDP figure.

The ABS notes the increase was driven by growth in services industries such as information, media and telecommunications (2.7%), retail trade (1.0%) and arts and recreation services (2.2%).

Government final consumption expenditure also rose by 0.7% for the quarter, leaving annual growth at 3.6%. This contributed 0.1ppts to quarterly GDP.

Public gross fixed capital formation, linked to an increase in military spending, rose by 6.0% over the quarter, adding 0.2ppts to GDP.

Net exports, as opposed to the previous quarter, made no contribution to GDP. 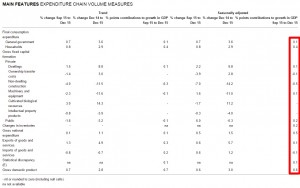 While in volume terms GDP exceeded expectations, that result was somewhat tempered by continued weakness in national incomes.

Real net national disposable income, described by the ABS as “a broader measure of change in national economic well–being”, fell by 0.1% over the quarter in seasonally adjusted terms, leaving the annual decline at 1.1%.

Gareth Aird, an economist at CBA, notes that nominal GDP, the broadest measure of income in the economy, grew by less than real GDP in the December quarter.

“This weakness is weighing on confidence, wages and government revenue,” says Aird. “It makes debt repayment for households and businesses harder, notwithstanding record low interest rates.”

“It reflects a big decline in commodity prices which puts downward pressure on wages, company profits and government revenue growth. And it is why the economy feels weaker that the headline GDP numbers imply.”

While a backward-looking data release, showing where the economy has been rather than where it is heading, in volume terms the report was far stronger than what many had imagined, even with persistent weakness in national incomes.

In what will no doubt please the RBA, household expenditure continued to impress, fitting with recent improvements in the labour market along with substantial gains in residential property prices. At a time when business investment remains weak, this will likely need to strengthen further in order to power economic growth in the quarters ahead.

This is what the RBA expects, heightening the importance of upcoming labour market and housing data, along with the upcoming federal budget, given their implications for household spending.

Despite the backward looking nature of the release, the strength of the data has seen the odds of a near term rate cut from the RBA diminish somewhat, helping to underpin the Australian dollar which has rocketed higher in the minutes following the release.

Australia’s stock market has also welcomed the news with the ASX 200 pushing above the 5,000 point level in recent trade. It currently trades at 5,005 points, representing an increase of 1.68%. 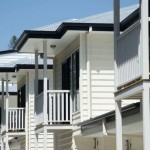